Keeping a pulse on the laws of logistics, no matter where you're traveling.

In this day and age the laws and regulations keep changing all the time.  Most states these days have different laws for weight and width restrictions from their neighboring states and it is our knowledge that can help you through the logistics.

In this day and age the laws and regulations keep changing all the time.  Most states these days have different laws for weight and width restrictions from there neighboring state and it is our knowledge that can help you through the logistics for getting your investment moved from point “A” to point “B”.  We believe a specialized fleet and knowledge from experience helps get the job done cost effectively. Our drivers take pride in their work, and assure customer satisfaction and safety at all times while moving your investment.

Our Fleet Consist of

In the field or in the office, our assets and expertise are unmatched.

We self-perform all aspects of site excavation, whether it is footer excavation for a future building, concrete piers inside an industrial facility, or site excavation. We have the knowledge and equipment to get it done proficiently and on schedule.

When we are contracted to perform work, you are actually hiring our team.  We are a family owned business, so on any given day your job has our team working for you consisting of the company owners, to project managers, to field supervisors, to field employees.  We believe that staying organized, open communication, and looking forward has made us a team player.

We have made a commitment to take that step into GPS technology.  That step has gone from building the 3d model of the job, to GPS construction layout, all the way up to GPS machine control.  Our operators and field crews are looking at the same plans that the architect and or engineer have developed but in real time drawing locations and real time grade elevations.

We build all the 3D models for the jobs in house, which we have learned to be a huge asset.  During this process we work closely with the original designers and make what seems to be a seamless transition from design to project completion.

We also have the ability to locate underground utilities and incorporate them into the 3D model so that our staff can utilize this information later on during construction.  Field changes can be updated within hours and not days in order to keep the job proceeding forward.

No matter what the project, a polished look is essential.

Whether it is a residential driveway, parking lot, or municipal street we treat all projects the same.
We believe asphalt pavement is a finished product that can either help or hurt the aesthetics of an area—that's why we take a lot of pride in our asphalt pavement placing.  We use the latest electronic control technology on our pavers to help compliment the goals set on the job.

Big or small, our milling machine does it all.

Our Wirtgen W120F milling machine is built to withstand the most challenging terrain.
The rear mount design allows it to fit into small areas, something a larger mill is just not capable of doing. The machine is also large enough to mill a city street or mill off all the asphalt in an existing parking lot.

Let the snow fall—we can handle it.

Living in a climate that is cold and snowy four months out of the year, snow management is imperative to Upstate New York survival.  Our company has been plowing snow for decades and has the equipment to support the most severe winter storms.  After all, we are experts at moving dirt—snow isn't any different.

We know our capabilities, thus we strictly stay with commercial accounts within the City of Auburn and surrounding Townships.  Our theory behind this is to practically see the site conditions around us and be able to respond effectively when snow services are required.

We have a vast fleet of snow plowing equipment that makes us ready for any unexpected snowfall, which may occur.  Our vast fleet of equipment thus makes it possible for us to service all of our customers in a timely manner.  When a customer utilizes our services, we develop an internal job specific schedule taking into account store hours and contract obligations in order to achieve what we call wet pavement.

Services Provided for Snow Management include:

Let us help you beautify your landscape.

We can supply you with a wide variety of products to meet your needs.  For your convenience we provide a delivery service via our dumptrucks.

The whole concept of a construction company developed when Paul and his wife decided to build a house.   Soon after hauling in the fill dirt he realized that he needed to level off this dirt and purchased a bulldozer, the legacy was now started.

In 1972 the company was started, which was called Paul F. Vitale.  Working out of their new 1400 square foot shop, Paul was the president with his wife Gloria doing the books, his brother Mike as a truck driver and his other brother Vince the operator.

In 1979 the three brothers ventured into new territory by purchasing a concrete plant. Mike was made president of this new venture which has brought the Vitale-Robinson Concrete organization to where it is today.

In 1982, looking to expand its services, the company purchased an asphalt paver and roller.  This was the start of the company becoming a complete site development company.  Pauls’ brother Vince stopped operating equipment and took on the leadership role of overseeing the asphalt paving division.

In 1983 the company out grew its Turnpike Road facility, which led to the construction of a 7200 square foot facility on North St. Rd.  This enabled the company to take the next step for future growth.

In 1988 a spinoff company of Paul F. Vitale Inc. was created and called Vitale Heavy Hauling Inc.  This company was a logistics company specializing in lowboy services for overweight and over dimensional loads.

In 1992 Paul’s son Ben graduated from RIT and started working full time in the family business.

In 1995 due to the expanded growth of the companies, a corporate decision was made to construct a new 22,800 square foot office and maintenance facility, in which we are presently located today. 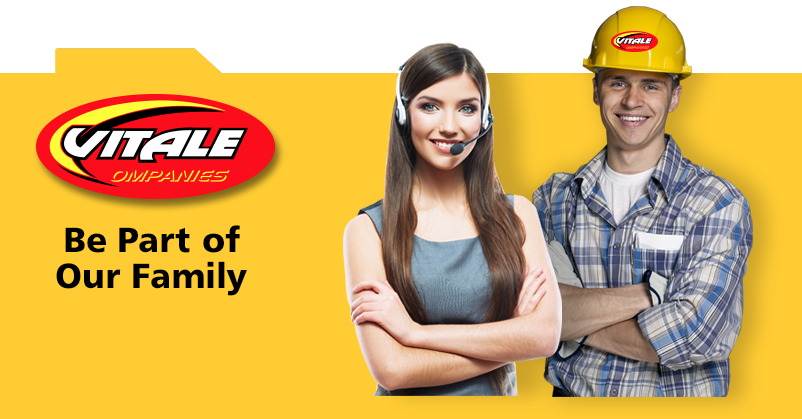 Award $944,089 - The Rehabilitation of Farrell Road in the Town of Geddes.

The project included the full reconstruction of Farrell Road from John Glenn Blvd to State Fair Blvd. The reconstruction included a newly reconstructed two lane roadway with new subbase, asphalt, closed storm sewer system, granite curbing, signage, pavement markings and restoration. This project was designed to be completed in 45 working days, but with our aggressive work schedule we finished 12 days ahead of schedule. This was a highly publicized project as the road was plagued by potholes for years, asplans to fix the road first began in 2006.

Award $944,089 - The Rehabilitation of Farrell Road in the Town of Geddes.

The project included the full reconstruction of Farrell Road from John Glenn Blvd to State Fair Blvd. The reconstruction included a newly reconstructed two lane roadway with new subbase, asphalt, closed storm sewer system, granite curbing, signage, pavement markings and restoration. This project was designed to be completed in 45 working days, but with our aggressive work schedule we finished 12 days ahead of schedule. This was a highly publicized project as the road was plagued by potholes for years, asplans to fix the road first began in 2006.